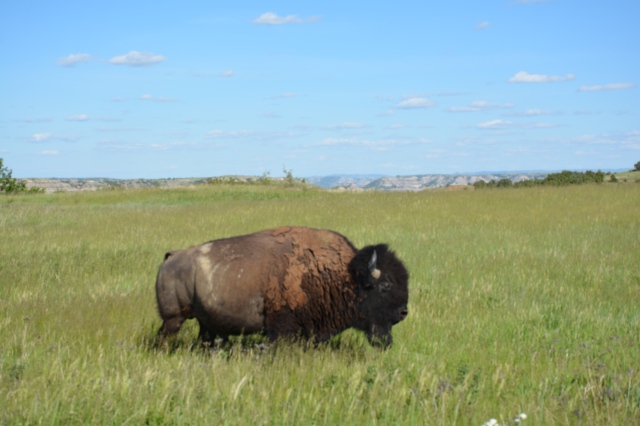 Some have mastered the art of winter coat removal better than others. 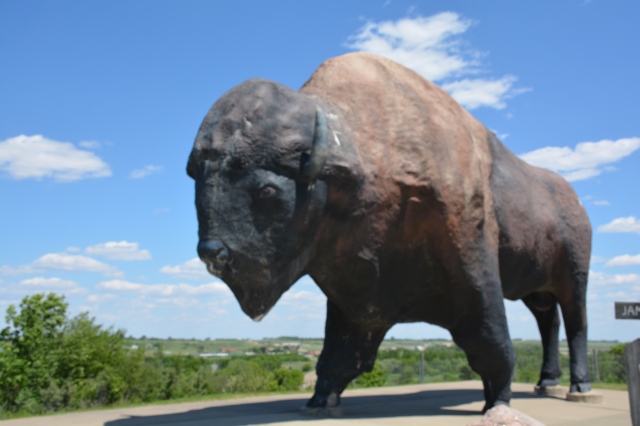 Two days of travel and we’ve arrived at our first real destination – Teddy Roosevelt National Park.   We’ll spend today there.  Yesterday, though, was a day of windshield discovery.  Our route took us north on I-29, then a sharp left on I-94 at Fargo.  Northeast South Dakota and southern North Dakota (how’s that for multi-directional?) are beautiful.  After leaving Sioux Falls, any semblance of urban place slips away.  Wyoming claims to be big sky country but the sky is enormous here too.  The prairie and fields extend for miles.  Exit signs (those that don’t say “no services”) point the way to towns two or three miles away and the towns are clearly visible on the horizon.   I was struck by the many ponds and small lakes along the highway.  They just appeared as water with no discernible edge other than the reeds lining them.  They extend right up to the interstate and in some cases railroad tracks, fences and power poles bisected them.  Imagine what this would have looked like without these infrastructure interruptions.  The wind was pretty strong and you could tell it was probably a common thing.  Farm houses are surounded by heavily planted rows of trees to serve as a wind (and snow?) break.  At times there were windbreaks along the highway – those evergreen trees that look like graduated sizes of cookies stacked to make a Christmas tree.

After hundreds of miles of flat prairie, small bumps start to appear in the North Dakota landscape – like the hill in Jamestown – and the road begins to climb in elevation.  It’s subtle, though, and the road is so straight it’s not noticeable at first.  Kind of like putting the treadmill on a small incline and slowly increasing it.  Then the small hills become more common and then it suddenly becomes much more rugged and Wild West-ish.  The first badlands appeared around Dickinson which, unfortunately, is where the first Praying Mantis oil and gas rigs also appeared accompanied by rows of tanks.  These are the real interruptions in the landscape.  Even though you can argue that the symmetry of the tanks  mimics the much larger grain silos and that the rigs are necessary for energy independence,  it is such a disturbance in the wide open spaces.  The huge flat tanks typically associated with oil and gas distribution as well as a massive building were visible far off on the horizon, probably along the rail line.  This all made me very sad.  Is this what cattle ranchers felt when the railroad arrived?  Obviously, I don’t live here but the change in lifestyle is palpable.

I’ve always loved road trips. There’s something about the way the world slowly unfolds as you’re driving. Just when I think I’ll die of boredom traveling I-70 across Kansas from Missouri to Colorado, I realize that the cloud bank on the horizon is actually the Rockies. It comes clearer into focus with each passing mile and the air cools as we climb in elevation. That sense of discovery only happens on the ground. It’s never been the same when I’ve stepped on a plane in Springfield, MO and disembarked in Denver or elsewhere. I’ve always found that to be a bit disorienting.

This summer, my daughter Sarah and I are taking an extended road trip to the Pacific Northwest. We’re going to discover new places, explore National Parks we’ve never visited, and experience West Coast culture. We plan to be outside a lot and hope to put our hiking boots to good use. Thus the name of this blog. I’ve enjoyed thirty-plus years in municipal government, working in both the economic development and planning fields. Thirty-plus years in high heels! It’s time to let my tendons stretch a little and spend a few weeks in hiking boots.