One of the things I like best about road trips is discovering something really interesting just by choosing one particular route over another.  We left Klamath Falls, Oregon bound for Lassen Volcanic National Park.  We made a spur of the moment decision to take a route through Tulelake, California and Lava Beds National Monument.  It also passed through the Klamath Basin National Wildlife Refuge.  On our way to Klamath Falls, we had skirted around Upper Klamath Lake.   Broad valleys surrounded a large lake.  Leading up to and following the lake were huge wetlands with shallow creeks or rivers winding through the grasses.  The dry land was filled with enormous cattle herds. It was a very peaceful drive.  This area is an important bird habitat and is a stop for migrating bald eagles.  Very enjoyable drive.

Also on this drive, we were treated to views of Mount Shasta along the way.

As we were driving to Lava Beds, we saw a sign for the World War II Valor in the Pacific National Monument at Tulelake so stopped to see what it was.  This is one of several sites that was a Japanese segregation center  (War Relocation Camp) during World War II.  The small Ranger Station located at the County Fairgrounds had really good interpretive information.  The two associated sites, the large segregation center and the prison, are only accessible on Ranger-led tours but we drove out to the prison facility which was closest to the Ranger Station.  It was built as a WPA camp, then used as a prison for Japanese families who refused to sign a pledge that they would fight for the US under any circumstances, then used as a POW camp for Italian prisoners who worked on the surrounding farms.

Lava Beds National Monument was such a great surprise!  It’s weird – literally beds of lava that landed here miles from the Medicine Lake volcano from eruptions over the last, oh, half million years or so.  This was one of the parks where the north entrance wasn’t staffed and the visitor center was all the way on the south end.  What also didn’t make sense was the it was relatively easily accessible from the north but was miles on a forest service road on the south.  What’s up with that, NPS?  So we had to rely on the interpretive signs along the way (Fodor only covers National Parks – not National Monuments).  As you can see, some of them were really minimalist.

The coolest thing about Lava Beds is that there are a bunch of caves that were created when the lava rocks cooled.  You can explore these caves but, of course, need to be prepared with headlamps, proper clothes and, in some cases, knee pads.  Since we hadn’t been to the visitor center and weren’t really prepared, Sarah and I just checked out some of the entrances.  This is a way cool park!

Continuing on our Volcanic Legacy tour, we arrived at Lassen Volcanic National Park.  Cool history.  Lassen erupted in 1914 and 1915 and one of the eruptions was captured in a series of still photographs.  Pretty amazing considering it was 100 years ago.  I’d never really thought about just how far lava could be “thrown out” of a volcano until I visited Lava Beds and Lassen.  It’s humbling to see the volcano miles away while standing in front of some of its spent lava. 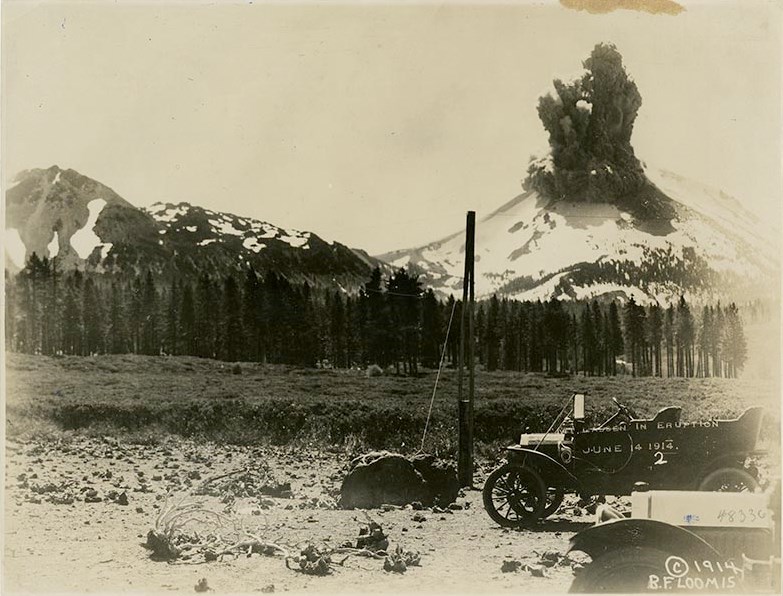 The Visitor Center has a seismograph and an exhibit that displays recent seismic activity.  When we were there, there had been a 1.0 tremor within the last 24 hours and numerous similarly sized tremors that week.    There are also a few mudpots/boiling springs and sulphur vents in the area – one right along the main scenic drive.  The biggest concentration is at Bumpass Hell.  I really wanted to go there just because of the name but the trail was closed because of icy conditions.

As you can see, there was quite a bit of snow still at Lassen.  Check out the snow still covering the top of the toilets!

We spent the night at Shingletown KOA outside of Lassen and, for the first time, I saw emergency evacuation plans posted prominently in the laundry and bathhouse.  They enumerated wildfires, lightning strikes, earthquakes and volcanic eruptions as potential reasons to evacuate.  Naively, I thought this was a little bit of overkill until a few days later when a wildfire swept through Kern County, California.  We had considered staying at Lake Isabella KOA as we were pondering our route.   That campground was evacuated because of the wildfire.

Just as our spontaneous routing change brought pleasant surprises, our evening in Shingletown was also a quiet pleasure.  It was laundry time.  The KOA had big Adirondack chairs outside the laundry room and Sarah and I sat out in the cool evening, eating pizza from the only restaurant in town before turning in for the night.